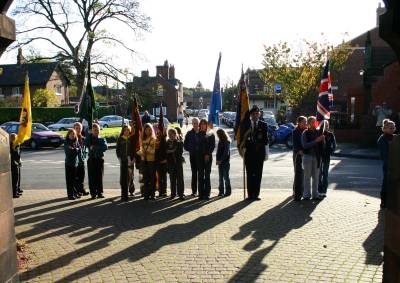 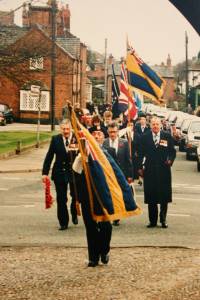 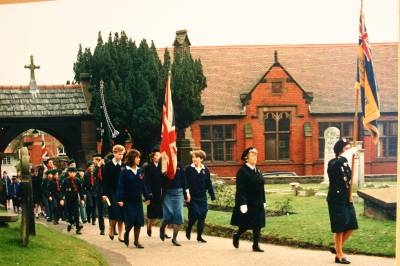 When we learned of the sudden and unexpected death of Brian a few short weeks ago, both his family and friends were stunned. Brian was always there, steady and reliable, with a gentle nature, kind and generous, and with a delightful sense of humour. Born in Hawthorn Road in 1949, to Bill and Hilda Lewis, Brian was extremely proud of his Christleton heritage and grew up here with his three brothers. He was always resourceful, and made his parents proud by singing in the church choir, bell ringing, and winning a place at Grammar School. He joined the army as a boy soldier aged 17 and soon showed great strengths, a thirst for knowledge, a sense of purpose, and great professionalism. He brought that to the fore later in his life when he proudly carried the British Legion standard on Remembrance Days and other commemorations in the village, following in the footsteps of Bill and Hilda his parents, who had done so for longer than most of us can remember. He was always immaculately dressed and proud in carrying out this role, and a calming influence on the often nervous young people who were also carrying standards in the parade. Brian made swift progress in the army as he was an excellent leader, fair and trusted by his men, a man of his word, someone who always led by example. He duly completed his commando training in Plymouth, but preferred to wear his Army Air Corps blue, to the regimental green beret.

He married the love of his life Lorraine in 1974, and you rarely ever saw them apart. They were true soul mates and became wonderful parents and grandparents. Brian was a dedicated husband and family man, often having to share them with his military duties. There was always lots of fun and laughter, and a small amount of discipline. He had strong standards and a great work ethic, so his training as an engineer in the army provided him with excellent transferable skills for his transfer to civilian life. He had a brilliant logical mind, a unique personality, which made him a respected member of any team. He enabled all who served with him to reach his or her potential. He was a friend to so many people, and so well respected, a point emphasised by the numbers of friends and neighbours who lined the streets near his home and churchyard as his funeral cortege went by.

Lorraine, Melanie, Mark, Clare, Keiran and Summer will miss him enormously. He was such a dedicated and devoted husband, father and proud grandfather. We will miss him too, as he filled countless voluntary roles in his life, serving colleagues and the community. He was a loyal member of the congregation at St James, Church Treasurer for many years together with Lorraine, and our loyal Standard Bearer. He put his military service and training to good use, in this and other parts of his life, always cheerful, diligent, caring and respected by everyone he met. My last memory of Brian is seeing him together with his great friend Paul, standing on top of tall scaffolding, cleaning and replacing the polycarbonate cover on the outside of the Millennium Window at St James’. Despite the precarious nature of their task, Brian was still smiling and cracking jokes. Remembrance Day 2020 will not be the same this year for so many different reasons, but most of all for us, this caring generous man will no longer be standing to attention at the Village War Memorial. The Village has lost one of its own. Rest in peace Brian, Gone but never ever forgotten.

With sincere thanks to Melanie, Lorraine and the Lewis family for allowing me to share their Eulogy for Brian.